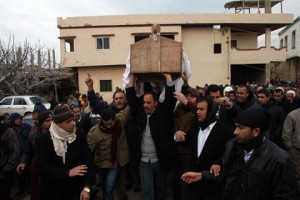 Syrian authorities have returned the body of the slain 14 years old Lebanese and freed his two uncles, who said they came under fire in a fishing boat along the sea border with Syria, an AFP correspondent said.

AFP reported that body of Maher Hamad, who together with his uncles was snatched from their boat off the Lebanese coast on Saturday, was handed over to officials at the northern border crossing of Abboudiyeh.

A funeral procession for Maher later made its way from his parents’ house in the village of Arida towards the border, where mourners pelted Syrian troops on the other side with stones.

“There is no God but God, Bashar al-Assad is the enemy of God,” they chanted, referring to the Syrian president who has faced 10 months of anti-regime protests.

Without the troops retaliating, the mourners turned around and made their way back to the village mosque.

Fadi Hamad, who was handed over to Lebanese authorities overnight with his brother Khaled and the body of their nephew, recounted what he said was the boy’s fatal shooting at the hands of Syrian troops.

“We had cast our nets the night before and early Saturday morning we headed out to pull them in,” Hamad, 36, told AFP.

“We then saw a boat pulling up to us and urged it to move back as they were nearing our net,” he added.

“They disappeared briefly and then came back, and when they were near enough I could see about six armed men in the boat. Four of them climbed into our boat. We were terrified. They opened fire and both Maher and my brother were injured.”

The gunmen then forced the three fishermen into Syria, where Maher died of his wounds, he said.

Hamad said he was taken to a military intelligence centre in the Syrian coastal town of Tartous where he was beaten and interrogated on whether he was an arms smuggler.

“I was asked repeatedly whether the arms were coming from Saad Hariri,” Lebanon’s former premier and head of the anti-Assad opposition in Beirut, he said.

“I told them I was a fisherman… but they kept hitting me, and my hands were tied. About an hour later, I was told there had been a mistake and President Assad wanted to forgive me. I was also informed my nephew was dead.”

Khaled Hamad, 35, was treated for gunshot wounds to the leg.

SANA said port officials off Tartous warned the Lebanese to obey orders but the fishermen instead “threw their boxes in the sea in an attempt to escape”.

The boat then came under fire from “another Lebanese boat coming from Lebanese waters,” leaving one person injured and another dead, according to SANA.

Lebanese President Michel Sleiman has condemned the incident, which sparked protests in Arida that saw angry villagers on Saturday burn tyres some 200 metres (yards) from the border, briefly closing down the crossing.

Protesters also set up a tent near the border where several gathered on Sunday to protest the incident.

Faced with an anti-regime uprising, the Syrian army in November laced the Lebanese border with landmines in a bid to curb arms smuggling and to hamper army defectors and refugees from fleeing.

Syrian security forces killed three members of a “terrorist group” on Friday night as they tried to infiltrate the Tal Kala area from Lebanon, according to SANA.