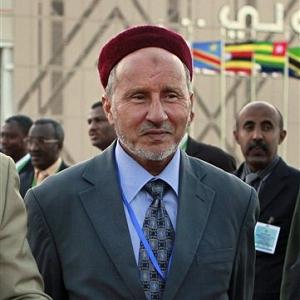 Libya’s former justice minister says he has formed a transitional government based in the country’s east, the focal point of an uprising against Libyan leader Moammar Gadhafi.

Mustafa Abdel Jalil made the announcement in an interview with Qatar-based television network Al-Jazeera late Saturday.

Abdel Jalil says the transitional government is based in Libya’s second-largest city of Benghazi and includes military and civilian figures. He says it will lead for “no more than three months” to prepare for “fair elections” enabling the Libyan people to choose their leader.

It is not clear how much support Jalil’s caretaker government has in opposition-held communities. Anti-government protesters backed by defecting army units have seized control of eastern Libya and several parts of the west after battles with pro-Gadhafi forces.

Libya’s Ambassador to the United States Ali Aujali said Saturday he supports the caretaker government established by Abdel Jalil. Aujali is one of many Libyan diplomats around the world who have broken ties with Mr. Gadhafi since the uprising started.

The U.S. State Department had no immediate comment on Abdel Jalil’s move.

Mr. Gadhafi still controls the Libyan capital, Tripoli, in the country’s northwest. Armed Gadhafi loyalists patrolled the city in all-terrain vehicles Saturday, a day after he promised to supply his supporters with weapons to defend his leadership.

Many Tripoli residents stayed in their homes, terrified of encountering pro-Gadhafi militiamen who have shot and killed scores of opposition protesters this month. Some residents gathered Saturday to attend the funeral of an anti-government demonstrator who was shot Friday.

Mr. Gadhafi’s son, Saif al-Islam Gadhafi, told journalists that most of Libya was “calm” and “peaceful.” He described opposition forces controlling the western cities of Misrata and Zawiya as a minor problem.