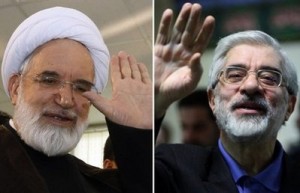 Iran’s opposition leaders remained defiant Wednesday despite calls from hard-liners for them to be brought to trial and put to death, with one reform advocate saying he was willing to “pay any price” in pursuit of democratic change.

Iran’s beleaguered opposition brought tens of thousands of its supporters into the streets on Monday, ostensibly to display solidarity with Egypt’s anti-government protest movement. It was also a chance for the opposition to put on its first significant show of strength in more than a year, and it set off clashes with police that killed two people and injured dozens.

A day later, furious hard-line lawmakers pumped their fists in the air in parliament and called for opposition leaders to be tried and sentenced to death. One of the pro-reform figures, Mahdi Karroubi, was unmoved. 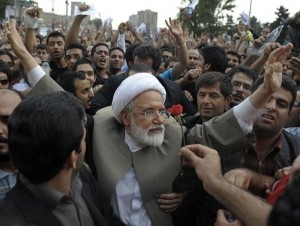 “I declare that I am not afraid of any threat,” said Karroubi, who has been effectively kept under house arrest since first calling for the demonstrations earlier this month. “As I’ve demonstrated in serving the nation as a soldier (political activist) since 1962, I am ready to pay any price in this graceful path.”

Karroubi was one of two pro-reform candidates in the 2009 presidential election that sparked months of street protests which mushroomed into a movement against Iran’s ruling system. The unrest, which was put down with a heavy security crackdown by the military and a mass trial, posed the biggest challenge ever to Iran’s clerical regime, which came to power in the 1979 revolution.

Karroubi urged Iran’s Islamic ruling system to learn from the fate of governments that remained aloof from their people, alluding to the toppling of autocratic leaders in Tunisia and Egypt.

“We warn (the ruling system) that before it is too late, stop being stubborn and hear the voice of the people,” he said in remarks posted on his website, sahamnews.org. “Exercising violence and opposing peoples’ wishes can last for a limited time. Take a lesson from the fate of governments that distanced themselves from the people.”

Both sides in Iran have sought to make gains from the ouster of Egyptian President Hosni Mubarak, whose regime was a regional adversary of Iran’s leaders. The government cast it as a repeat of Iran’s Islamic Revolution. Monday’s protesters said the 18-day uprising that ousted Mubarak was similar to their own campaign for change after Iran’s disputed 2009 presidential election. 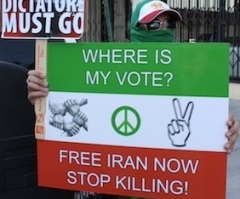 “Praise be on you. Your glorious rally on Feb. 14 is a great achievement for the nation and the (opposition) Green Movement,” Mousavi said on his website, kaleme.com.

Mousavi’s claims that he was the rightful winner of the 2009 election and that he was deprived of victory through fraud set off Iran’s protest movement.

State TV on Wednesday called Mousavi and Karroubi mercenaries carrying out a plot designed by Iran’s enemies and urged government supporters to rally on Friday.

The two sides even differed over the identity of one of those killed in Monday’s clashes – Sane Jaleh, a 26-year-old student at Tehran’s University of Art.

State television said he was a government supporter and a member of the paramilitary force known as the Basij, which has been instrumental in putting down opposition protests.

Mousavi’s website said Jaleh was a member of Mousavi’s election campaign team. Seeking to prove it, the website published a photo of Jaleh standing next to the late Grand Ayatollah Hossein Ali Montazeri, Iran’s most senior dissident cleric, who died in December 2009.

A hard-line cleric, Ahmad Khatami, said the two opposition leaders were playing into the hands of the U.S. and Israel – a familiar accusation.

“Leaders of sedition, specifically Mousavi and Karroubi, are aiding the U.S. and Israel most,” Khatami said in a televised address before a group of clerics in the holy city of Qom, 80 miles (130 kilometers) south of the capital. “This (opposition rally) is a big service to the U.S. and the Zionists and a disgraceful blot in the face of seditionists.”

The audience chanted “death to Mousavi, Karroubi and Khatami,” in a gesture of support.

Khatami also said that by calling for Monday’s rallies, the two leaders had committed a crime known as moharebeh, or “fighting God,” which carries the death penalty. WP