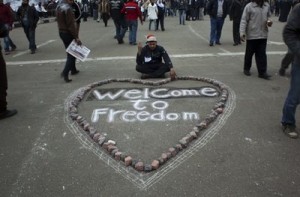 Iran and its ally Hezbollah have been quick to claim kinship with the mass demonstrations in Egypt, describing them as part of a “regional Islamic awakening,” but the reaction from Egypt’s own Islamic movement has been lukewarm.

The latest endorsement of the protesters came Monday when Seyed Hassan Nasrallah, leader of the political and militant Shiite group Hezbollah, gave a televised speech to a crowd of several hundred supporters gathered at an auditorium in south Beirut waving Egyptian and Hezbollah flags.

“The resistance Egyptians demonstrate does not differ from the resistance of Hezbollah during the 2006 war with Israel,” Mr. Nasrallah said. “I wish to be with you and offer my blood to support your cause.”

Iran and Hezbollah have reveled in the upsurge of opposition to Egypt’s President Hosni Mubarak, a traditional U.S. ally and one of their main rivals for regional influence.

Moreover, the prospect of Egypt’s Muslim Brotherhood gaining more power if Egypt holds free elections has raised fears in the U.S. that the pro-democracy movement could be hijacked by Islamists.

During Friday’s prayer sermon, Iran’s supreme leader, Ayatollah Ali Khamenei, said the oppressed people of Egypt and Tunisia were aspiring for an Islamic state modeled after Iran and that the street demonstrations were “liberating Islamic movements.”

Meanwhile, the Muslim Brotherhood acted quickly to distance itself from Iran and Hezbollah, saying it “regards the revolution as the Egyptian people’s revolution, not an Islamic revolution.”

“The first thing we want is not to have any political addresses to the people from outsiders,” said Mohammed Morsey, a spokesman for the Muslim Brotherhood.

“The revolution in Egypt has nothing to do with any outsiders. You must not underestimate the youth and say they are following foreign agendas,” he added.

The Muslim Brotherhood’s quick rejection of Iran’s advances could cause embarrassment in Iran.

If Egypt becomes a multiparty democracy and its Islamist movement develops along moderate lines, like the AK Party in Turkey, Iran’s influence could be eroded both in Iran and regionally.

“As people begin to see the geopolitical shifts this will bring, it will have a tremendous effect and will be an example everyone would want to emulate,” said Joshua Landis, director of the Center for Middle East Studies at the University of Oklahoma.

Egypt’s state television has followed the line of the government saying protests were instigated by foreign agents, and took calls from viewers on Friday who said they had seen Iranian faces in the crowds in Tahrir Square. No mention was made that it is extremely difficult for Iranian passport holders to enter Egypt due to lack of diplomatic ties.

And among the demonstrators on the streets of Cairo, there was little enthusiasm for Mr. Nasrallah’s endorsement. “We have one concept that we live by: not Hassan Nasrallah, not Khomenei, not America. The Egyptian people are in the streets for themselves,” said Hussein Suliman Hussein, 34 years old.

This rejection could play into the hands of Iran’s opposition. Over the past few days, Iran’s bloggers and opposition websites have been talking about how Iran was humiliated by the rejection by the Muslim Brotherhood.

Iran’s opposition has said the protest movements in Tunisia and Egypt were inspired by their own post-election protests in 2009, rather than by the Islamic revolution of 1979.