Egypt shuts down the Internet as protests enter 4th day

The Internet is off in Egypt.

On Tuesday, during the first day of the country’s protests for political reform, Twitter was blocked, and later Facebook.

Now Egypt’s entire Internet service has been disrupted by the order of President Hosni Mubarak, according to Times reporters in Egypt and neighboring countries, as well as reports from other news sources.

Times reporters in Egypt have also told the Technology blog that some phone services have been shut down — though some land lines and satellite phones are still working.

Mubarak has also imposed a curfew in the country and sent police and the military into the streets to prevent tens of thousands of Egyptians from continuing their protests, which are entering their fourth day. 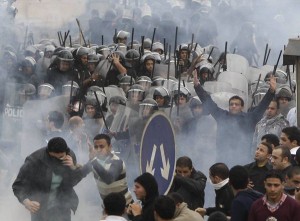 The demonstrations are growing each day, reports say, with protesters calling for the removal of Mubarak from the presidency — an office he has held for more than 30 years — and increased political freedoms.

Despite efforts by the Egyptian government to remove social media and the Web as tools for organizing and sharing information among protesters, many have found ways around such roadblocks and are seemingly encouraged — particularly young people.

Opposition leader Mohamed ElBaradei, a Nobel Peace Prize winner, returned to Egypt on Thursday to take part in the protests, On Friday, he was doused by a water cannon, along with many others.

The protests in Egypt have been inspired in part by the uprising in Tunisia that led to the overthrow of the government there. Twitter, Facebook, YouTube and other social media and Web services were also instrumental in mobilizing people in Tunisia. LAT