UN: Hezbollah smuggling arms to south of the Litani river 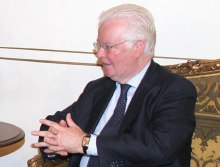 Michael Williams, UN special coordinator for Lebanon, said that Hezbollah militia is smuggling large amounts of weaponry to south of the Litani river and stocking them there and warned ” this is a violation of UN resolution 1701″

On September 3, a suspected weapons cache exploded in the south Lebanon town of Shehabiyeh, a Hezbollah stronghold.

Williams said there were concerns at the delay in which the UN peacekeeping force, UNIFIL, was given access to the site of the Shehabiyeh explosion.

“Many times the secretary general of Hezbollah has referred openly to the Hezbollah’s considerable armaments, sometimes in some detail, and has referred also to the replenishment of those armaments since the war of 2006, so I have to assume that this weaponry was smuggled into the country,” Williams said.

Commenting on the Israeli decision to withdraw from Ghajar he told reporter:

“I feel confident that this is going in the right direction and that we will be able to agree with the Israeli government on the withdrawal of their forces from northern Ghajar,” he said

He called it “an important step toward the full implementation of 1701” the UN resolution that led to the ceasefire in 2006.