by yalibnan
1286
By Ali Hussein Wiam Wahab's call for the resignation of the president was obviously not a personal opinion as he stated during his visit to MP Michel Aoun at Rabiyeh.
Share: 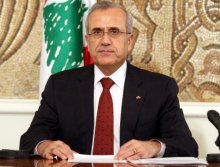 Wiam Wahab’s call for the resignation of the president was obviously not a personal opinion as he stated during his visit to MP Michel Aoun at Rabiyeh, but was reportedly part of a campaign against President Michel Suleiman orchestrated by Syria’s allies in Lebanon according to local observers.

Former minister Wahab a staunch ally of Syria on Wednesday attacked President Michel Suleiman and called on him to resign for allegedly failing to govern the country.

According to An-Nahar newspaper sources, the campaign against Suleiman and several government institutions is organized by a number of political allies of Syria who intend to form a new “radical” group that aims to “impose fresh conditions” on Lebanon’s pro-government leaders in light of regional developments that would help Damascus once again, to hold the upper hand over Lebanon.

The campaign has reportedly begun with Suleiman’s visit to the U.S. It intensified when the President announced the establishment of a National Dialogue Committee and called for the resumption of all-party talks to discuss the defense strategy.

– The timing of the dialogue talks which came right after the summit in Syria between the Iranian President Mahmoud Ahmadinejad , Syrian president Bashar al Assad and Hezbollah chief Sayyed Hassan Nasrallah

– The deletion of the word “resistance” from a clause in the final statement, following the dialogue talks.

– The so-called “security agreement” with the United States.

– April 2009 US Embassy request for information on Lebanon’s telecommunications grid.

But Wahab’s call for the president to resign was met with outrage :

Minister of Interior Ziad Baroud condemned the campaign of criticism against Suleiman. “Do they want him to be the president of all of Lebanon or not?” he asked the MPs who were attending parliamentary commission meetings on Thursday.

Lebanese Forces bloc MP Antoine Zahra told LBCI television on Thursday that President Michel Suleiman is “the first one” to ensure the proper implementation of the constitution.

“The Lebanese Forces only criticized Suleiman after he continuously attempted to appease one party,” said Zahra, in a possible reference to Hezbollah.

Zahra defended the 2007 security cooperation agreement between Lebanon and the US, saying that he objects to the Information and Telecommunications Commission’s decision to handle the case, because the PM did not authorize it to do so.

Minister of State Adnan as-Sayyed Hussein told Voice of Lebanon on Thursday that President Michel Suleiman’s decision to resume the national dialogue did not target Hezbollah, adding, “There is no strategic conflict between the president and Hezbollah.”

“Suleiman is a president that was elected through consensus,” said Soueid, adding, “Even [we], as March 14, have some remarks regarding the president’s performance.” However, there is a difference between commenting on Suleiman’s performance and calling on him to resign, he said.

The National Bloc following its meeting on Thursday condemned the campaign on Suleiman: “As if it is forbidden for someone to have a centrist stance, ” the statement said

Former Minister Wadih al-Khazen said: “The campaign on the president is unjust and hits at his national credibility.”

The so called security agreement with the US according to observers is nothing but an “American donation to train and equip the Internal Security Forces.”

On January 25, 2007 at the Paris-3 International Donor Conference the US committed to provide $86 million to the ISF, including training of officers and soldiers, training trainers, and equipment needed by the internal security forces to carry out its duties.

During two separate Cabinet sessions on February 8 and 20, 2007, Lebanon approved the decisions taken by Paris-3, and the government tasked the Director General of the Internal Security Forces, Maj. Gen. Ashraf Rifi, to negotiate with donors in the United States to sign an agreement that includes details of the donation.

On October 9, 2007 the cabinet approved the agreement which was signed by Rifi in line with Constitutional mechanisms.

The April 2009 US Embassy request for information on Lebanon’s mobile network issue is also part of the orchestrated campaign.

According to an observer very familiar with the case, “the US embassy asked for information about the two mobile phone companies, Alfa and MTC Touch, last April because they were both supposed to be for sale. It is the responsibility of the embassy in such a situation to obtain as much information as possible on these companies in order to provide it to prospective US companies that may be interested in bidding for them.”

The observer told Ya Libnan: “Since Hezbollah has its own telecom network the issue of the phone companies is considered very sensitive. General Michel Aoun’s son in Law Gebran Basil who was the telecom minister at the time rejected the request and the whole issue died until Bassil’s successor, Sharbel Nahhas of Aoun’s Free Patriotic Movement, leaked the information to As Safir to try to embarrass the US and the president.”

The National News Agency (NNA) reported on Thursday that President Michel Suleiman called for Lebanese unity and holding on to national principles, which, he added are the strongest shield against any foreign threats.