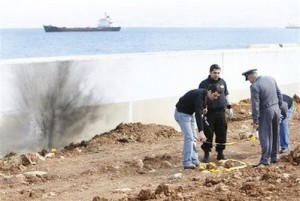 A Syrian construction worker identified as Mohammad al-Wardi was killed, and two other workers were injured after a bomb exploded in the Normandy landfill near Biel in downtown Beirut on Saturday.

An army spokesperson said the bomb was likely left over from the Civil War, adding that the workers were handling the bomb when it exploded.

According to the National News Agency that security forces detained one of the injured workers, identified as Jumaa Ahmed al-Wejaa for investigation of the incident.

Picture: Lebanese police investigators, inspect the scene where a bomb exploded in the Normandy landfill near Biel exhibition center, in downtown Beirut, Lebanon, on Saturday March 6, 2010.