Ghajar residents say they are Syrian 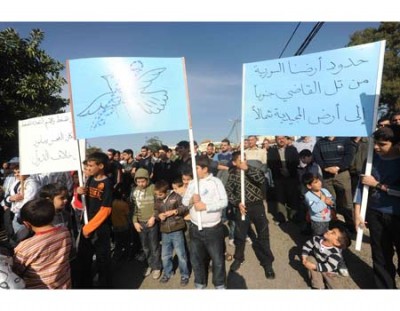 “They will divide our people, cut families in two,” the villagers chanted.

Secretary for the town council Hussein Khatib insisted that Ghajar residents have no connection with Lebanon. “We would be like refugees in Lebanon,” Khatib said.

He added: The town’s division was “just like separating the son from his father or the daughter from her mother.”

“They will divide our people, cut families in two,” the villagers chanted during the protest .

He said dividing the village would leave 1,700 people living in the Lebanese-controlled part and 500 on the Israeli-controlled side.

The northern part of Ghajar is in Lebanon and the rest in the Golan Heights which Israel seized from Syria in 1967 and later annexed in a move not recognized by the international community.

Unlike the Druze of the Golan Heights , Ghajar residents who are members of the Alawite Islamic minority , accepted Israeli nationality when the Golan was annexed in 1981.

Khatib said that even though residents accepted Israeli citizenship in 1981, “our village’s identity is Syrian.”

Ghajar is Syrian, it’s people are Syrian and its land is Syrian,” Khatib said.